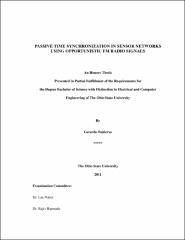 ABSTRACT Time synchronization is a critical piece of infrastructure for any wireless sensor network. It is necessary for applications such as audio localization, beam-forming, velocity calculation, and duplicate event detection. All of which require the coordination of multiple nodes. Recent advances in low-cost, low-power wireless sensors have led to an increased interest in large-scale networks of small, wireless, low-power sensor nodes. Because of the more stringent power and cost requirements that this technology is driving, current time synchronization techniques must be updated to capitalize on these advances. One time synchronization method developed specifically for wireless sensor networks is Reference Broadcast Synchronization. In RBS, a reference broadcast is transmitted to sensor nodes that require synchronization. Be recording the time of arrival, nodes can then use those time stamps to synchronize with each other. This project aimed to make the RBS system even more robust, energy efficient, and cost effective by replacing the reference broadcast with an ambient RF signal (FM, TV, AM, or satellite signals) already prevalent in the environment. The purpose of this project was to demonstrate the viability of using Opportunistic RF synchronization by 1.) quantifying error, 2.) applying this synchronization method in a real world application, and 3.), implementing a wireless sensor network using Android smart phones as sensor nodes. Many of the objectives for the project were successfully completed. For convenience and economic reasons, an FM signal was chosen as the reference broadcast. FM Radio Synchronization error was then quantified using local FM Radio stations. The results of this experiment were very favorable. Using 5 second segments for correlation, total error was found to be 0.208±4.499μs. Using 3 second segments, average error was 2.33 ± 6.784μs. Using 400ms segments, synchronization error was calculated to be 4.76 ± 8.835μs. These results were comparable to sync errors of methods currently in widespread use. It was also shown that Opportunistic RF Synchronization could be used in real world applications as well. Again FM was the RF signal of choice. FM Radio Synchronization was tested in an Audio Localization experiment with favorable results. Implementation of an Android Wireless Sensor Network according to our specifications, however, could not be achieved. HTC EVO 4G’s were programmed to communicate through TCP / IP network connections, record audio with a microphone, and to record FM Radio streams from the EVO’s internal FM radio. Although recording these two sources separately as different data tracks was successful, simultaneous recording of these streams could not be accomplished (simultaneous recording is essential for Opportunistic RF Synchronization). Although the Android smart phone implementation was not a total success, this project still provided data that supported the practical use of Opportunistic RF Synchronization.