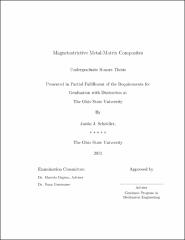 In this research, the prospect of embedding rolled Galfenol samples with wound induction coils was tested by embedding steel samples wound with induction coils. A 10.16 mm (0.4 in) wide steel sample, wound with a 60 turn induction coil was successfully embedded with two Al 3003-H18 foil using ultrasonic consolidation. Despite the embedding success, the induction coil was shorted to the Al matrix, although embedding was achieved with minimal deformation of the coil windings. It was theorized that a thicker insulation layer will provide increased protection during welding and will result in a reduction in the possibility of coil shorting. From the rolled Galfenol steel embedding trails carried out, the importance of the contact pressure distribution, build geometry, and sample preparation was shown. Further, it was shown that a sample in which the Galfenol is flush with the surrounding aluminum before embedding will have difficulty embedding due to the difference in elastic modulus between Galfenol and the aluminum in the direction of the applied normal force. It was concluded that the failure to embed Galfenol into previously consolidated aluminum foils was likely due to the height to width ratio of the foils, which lead to excessive deflection of the foils during welding. Due to the success of embedding 0.4 in wide sheets of Galfenol in the literature and the lack of success of embedding 0.55 in wide sheets in this research, despite the use of pressure-sensitive film and careful control of build geometry, it is theorized that a critical width of the active sample may exist, such that embedding samples wider is either impossible or very difficult. A magnetic transduction circuit was manufactured with the ability to characterize sheets of Galfenol or thin composites containing magnetostrictive materials and to dynamically excite cantilevered composites or sheet material via frequency operation of coil current and/or cantilever beam base displacement. The design of the magnetic circuit was verified through a three-dimensional finite element simulation of the circuit magnetic response, with inclusion of the majority of the circuit complexities. A test magnetic circuit was also manufactured to obtain experimental actuation curves for comparison with a three-dimensional finite element simulation. Comparisons showed discrepancies in the magnitude of the response, due to a lack of experimental data characterizing the Galfenol steel material. Despite, both the simulation and composite actuation curves in the literature showed that about 25 % of the available magnetostriction in the Galfenol samples could be transferred to the top surface of the composite, 0.006 in away from the embedded Galfenol. The actuation response of the composite in the magnetic transduction circuit was also simulated. It was found that the magnetostriction of Galfenol is uniform in the region where measurements will be taken. Also, despite complete magnetization of the Galfenol in the composite, the magnetostriction of the embedded Galfenol only reached 55 ppm, which is only 29 % of the saturation magnetostriction of the material itself. This, along with the strain developed in the Al matrix, shows significant loading of the Al encompassing the Galfenol. It was also determined from the simulation, that the strain in the composite can exceed that in the embedded Galfenol for certain composite geometries in which the Galfenol is located away from the neutral axis.