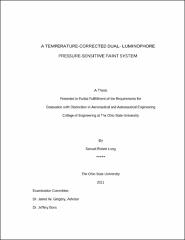 A new pressure-sensitive paint (PSP) system has been developed that can successfully resolve both pressure and temperature contours on a model and it was demonstrated on a NACA 0021 airfoil in a Mach 0.6 flow. Historically PSP measurement systems were susceptible to thermal changes which introduce false pressure data in the results. The oxygen sensor in PSP is also sensitive to temperature changes. The temperature error of the PSP used was quantified as 3 kPa per °C change from the reference condition. To remove or alleviate this source of error, a thermographic phosphor (Y0.99Ce0.01)2(Ga0.75Al0.25)5O12 was introduced into the paint mixture. When excited by a pulsed LED array at 480 nm, the phosphor emitted light at a spectrally distinct wavelength centered at 560 nm while PtTTFP emitted light centered at 665 nm. Using a color camera and optical filtering, the thermal information is carried by the green channel and the pressure signal is carried by the red channel. The red channel was normalized by the green and the resulting temperature error was reduced. Alternatively a thermographic map was determined and used to correct the corresponding pressure map utilizing a priori and in situ calibrations.