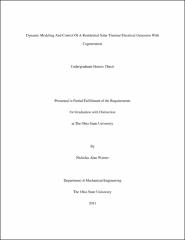 This thesis focuses on studying, through experiments and simulations, the feasibility of a small scale, residential thermal solar system for renewable energy capture. The work builds upon efforts conducted over the last 18 months for sourcing components for this thermal solar system and on the identification through thermodynamic simulations of appropriate working fluids for the low temperature organic Rankine cycle suited for thermal solar power generation. The work conducted in this thesis focuses on two complementary aspects. First, the experimentation with a first generation prototype consisting of a primary loop to capture the solar energy with a manifold of evacuated tubes, of thermal energy buffer and a secondary loop mimicking the energy input into an actual Rankine cycle. The data collected from this experimental setup is used to calibrate and validate a modeling effort. The second aspect of this work is the development of a dynamic model in Simulink of the thermal solar system, which can be used as a basis for system control and optimization. The dynamic component of this simulator significantly expands the earlier work done at steady state only, as the solar energy (input) and electricity demand (output) vary significantly with the time of the day, day of the year, weather conditions, etc. and are not synchronized. This temporal mismatch between the solar radiation and the electrical demand necessitates an energy buffer and energy management control strategy to maximize the utility of this residential solar plant. The further challenge stems from the need for a phase change (boiling/condensing) of the working fluid (R-600a – isobutane in this case) with the temperatures reachable within the solar collection system, and hence enabling an organic Rankine cycle to generate power. This study, while hampered by hardware shortcomings and an unusually cold and rainy testing period, achieved most of the objective of this study: the construction, instrumentation, data acquisition of a fully functioning primary loop, thermal storage unit and secondary loop. Furthermore, a dynamic model (in Simulink) was developed and partially calibrated with the sparse experimental data available and is fully functional, enabling the control system development, optimization and energy management effort to follow.