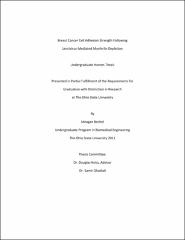 The purpose of this project was to quantify the effect of lentiviral-based knockdown of myoferlinon the adhesion and spreading of MDA-MB-231 human breast cancer cells. Myoferlinwas selected for this project because it is over expressed in metastatic breast cancer cells. While the effects of the gene knockdown on the morphology of MDA-MB-231 cells have been observed, it has yet to be analyzed in detail, and, thus, a cellular adhesion strength assay was developed. The cells were plated into xCELLigence E-plates and allowed to attach for 48 hr. The xCELLigenceE-Plate system measures the cells’ relative adhesion strength, degree of spreading, and cell number by calculating the changing electrical resistance as a result of cellular interaction with goldelectrodes at the bottom of the culture well. This measurement is reported as cellular index (CI). Initial spreading and adhesion measurements were taken from the first 3hrs of recordings. A difference in initial cell adhesion and spreading has been observed between the myoferlin-deficient and native cells, with the myoferlin-deficient cells having approximately twice theCI.After 48 hrs, trypsin (0.41%) was added to lift the cells off of the culture well. Microsoft Excel was used to derive representative equations from a graph of % maximum CI vs. time after trypsin addition; these equations were used to calculate the t1/2, time to reach 50% of the max CI, for each cell type. The myoferlin-deficient cells showed a 37.9% increase in release time. Cellular adhesion plays a significant role in cell motility, which is a key property in cancer invasion. Thus, the data suggest that myoferlin could play a role in the invasion process.