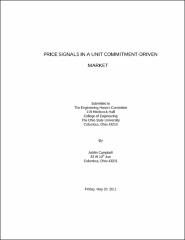 Electric power systems are made up of many generators, each with varying characteristics, including: minimum and maximum generating capacities, start up costs, and costs to run. An independent system operator uses unit-commitment models to determine which generating units should be in use at a given time in order to maximize the social welfare of electricity use. Because of the size and complexity of these models and the limited time in which to solve them, they are typically solved only to nearoptimality. Although these near-optimal solutions are similar in terms of overall welfare, energy prices and profits to individual generators can vary significantly between these solutions. A unit commitment model was run for one year using varying demand elasticities value and optimality gaps. The results show that generator profits do not even out over the year and generators can have significant profit differences. Solving closer to optimality does not reduce this effect. Average price differences for the year are small, but there are a significant number of hours during which the price difference between optimal and near-optimal is significant.