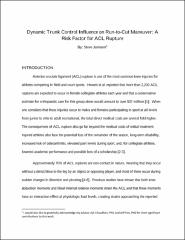 ACL rupture is one of the most common serious knee injuries in field and court sports, with an estimated 70% of these being non-contact in nature, often from sudden changes in direction or pivoting. Previous studies have shown that knee abduction and tibial internal rotation moments independently strain the ACL. In collegiate athletes, deficits in dynamic trunk control, measured during an isolated trunk perturbation test, have been correlated to knee injury incidence. The goal of this study was to determine if dynamic trunk control during a run-to-cut maneuver was correlated to the dynamic loading of the knee during the same activity. Thirty healthy subjects performed an unanticipated 45° run-to-cut in the laboratory, planting on their dominant leg. Markered motion capture techniques and inverse kinematics were used to calculate torso angle relative to vertical (outside tilt), torso angle relative to ground reaction force (torso-GRF) and peak knee abduction moment (pKAM) for three trials for each subject. Normalized knee abduction moments were log transformed to meet normality assumptions of the statistical models. A linear mixed model was used to determine the association between log transformed pKAM (Y) and each torso angle (X), with approach speed, cutting angle, and gender considered as covariates. Significant positive associations were found between the log transformed pKAM and outside tilt (p=0.009) and torso-GRF angle (p=0.029). These results suggest that an increased lean, in the frontal plane of the shoulders, away from the cutting direction and away from the GRF would increase peak knee abduction moment, thereby influencing ACL injury risk. Increased lean during an unanticipated task may be an indication of poorer dynamic trunk control or flawed control strategy and should be investigated in future studies.