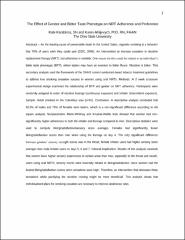 As the leading cause of preventable death in the United States, cigarette smoking is a behavior that 70% of users wish they could quit (CDC, 2009). An intervention to increase cessation is nicotine replacement therapy (NRT), but adherence is variable. One reason for this could be related to an individual’s bitter taste phenotype (BTP), where tasters may have an aversion to bitter flavor. Nicotine is bitter. This secondary analysis used the framework of the DHHS current evidenced-based tobacco treatment guidelines to address low smoking cessation success in women using oral NRTs. Methods: A 2 week crossover experimental design examined the relationship of BTP and gender on NRT adherence. Participants were randomly assigned to order of nicotine lozenge (continuous exposure) and inhaler (intermittent exposure). Sample: Adult smokers in the Columbus area (n=91). Conclusion: A descriptive analysis concluded that 65.5% of males and 75% of females were tasters, which is a non-significant difference according to chi square analysis. Nonparametric Mann-Whitney and Kruskal-Wallis tests showed that women had non-significantly higher adherences to both the inhaler and lozenge compared to men. Descriptive statistics were used to compute liking/satisfaction/sensory score averages. Females had significantly lower liking/satisfaction scores than men when using the lozenge on day 4. The only significant difference between genders’ sensory strength scores was in the throat; female inhaler users had higher sensory score averages than male inhaler users on days 5, 6 and 7. Clinical implication: Results of this analysis conclude that women have higher sensory experiences in certain areas than men, especially in the throat and mouth, when using oral NRTs; sensory scores were inversely related to liking/satisfaction, since women had the lowest liking/satisfaction scores when sensations were high. Therefore, an intervention that decreases these sensations while pacifying the nicotine craving might be more beneficial. This analysis shows that individualized plans for smoking cessation are necessary to improve abstinence rates.