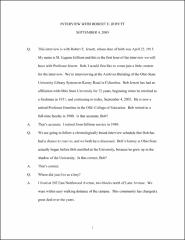 impact of war experiences on relationships
teaching vs. research

Dr. Jewett’s childhood home was near the OSU campus. He recalled some of his boyhood activities on campus; e.g. playing in the stadium while it was being built. He briefly described the neighborhood and schools around the campus. The undergraduates of the 1930’s were contrasted with the undergraduates of the 1990’s. As an undergraduate in the Arts College, Jewett had to pass a foreign language and take two years of ROTC. The students were concerned about the New Deal – pro and con. As a student, he believed that the faculties were encouraged to put more emphasis on teaching than research. The influence of John Dewey and progressive education was briefly discussed. Dr. Jewett described his experience as a student teacher. He taught a 10th grade history course in Circleville. The factors that led to a master’s degree and later a Ph.D. was summarized. The impact of World War II on him as a teacher, a citizen and a member of the Navy were compared. When Jewett returned to the faculty position at OSU, many of the students were veterans. They were more interested in “how to do it” than in philosophy behind it. His impressions of the McCarthy investigations and the Speaker’s Rule were described. Dr. Jewett described his experiences as a department chair. He provided some details about the student riots of 1970. The qualities of a student and the role of courses in other departments for graduate programs were discussed. In addition, the role of the Faculty Club for meeting other faculty members was stressed. Leading Themes 1. Dr. Jewett enrolled at OSU as a freshman in 1931 and retired from full-time faculty in 1979. 2. His childhood home was near campus. He describes skating on Mirror Lake as a boy, seeing games at the Ohio Field, playing in the new stadium, etc. 3. Life in the University area is discussed; schools, depression, racial diversity and university events. 4. His experiences as an OSU student are summarized. 5. He was disappointed that the Armory was destroyed. 6. Other campus changes are also mentioned. 7. Comparison of undergraduates in 1930’s to today. 8. His feelings about ROTC are expressed. 9. Student and faculty responses to the New Deal 10. With less emphasis put on research, the faculty had more time for teaching and advising students. 11. Boyd Boda as a teacher, writer, and promoter of progressive education. 12. Dr. Jewett summarizes his student teaching and first teaching position. 13. The foreign language required caused anxiety. 14. He summarizes the campus atmosphere at the start of World War II. 15. Bob explains the decision to volunteer into the Navy 16. While completing the dissertation, he taught at Bowling Green. 17. His classroom experiences with the returning veterans are described. 18. Dr. Jewett describes the impact of war experiences on relationships: student-teacher, husband-wife. 19. Encouraged to work with international educational systems 20. Dr. Jewett comments on the change of emphasis from teaching to research by the University administration. 21. The University administration shifted from the Middle Ages model to the corporate model. 22. The Bureau of Educational Research in the College of Education is described. 23. The impacts of the Korean War and McCarthy investigations on the University community. 24. The impacts of the Speakers Rule are discussed. 25. The responses of people to the Faculty Council voting against the Rose Bowl. 26. Dr. Jewett summarizes the organizational changes in the College of Education, including elimination of undergraduate programs. 27. Changes in student teaching experiences. 28. His memories of the 1970 riots are included. 29. The beneficial role of the Faculty Club in breaking college and departmental lines. 30. The University responses to external changes.