Emotion's Effect on Reasoning with Quantifiers 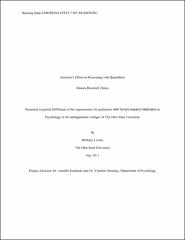 In making informed and educated decisions, logical reasoning is crucial for decision makers and people in everyday life, yet research has shown that people often consistently and systematically fail to reason logically (Wason & Johnson-Laird, 1972). Contextual factors such as biases, existing beliefs, motivation and emotion have also been shown to have effects on cognition and reasoning (e.g., Blanchette, 2006; Blanchette & Richards, 2004; Ditto & Lopez, 1992; Kunda, 1990; Markovits & Nantel, 1989). The present study examined the impact reading about an emotionally valenced topic (e.g., abortion, gay rights) would have on a person’s ability to reach a logical conclusion. It also explored the effect that emotional sentences vs. neutral sentences had on the interpretation of different quantifiers, in particular, whether participants were more accurate reasoning about quantifiers presented through emotionally neutral as opposed to emotionally valenced topics. In Experiment 1, participants read short, emotional or neutral paragraphs, and were asked to reason about the information presented in the paragraphs by responding to logical reasoning questions. Experiment 2 tested the participants’ interpretation of the quantifiers all, some, no and some…are not when encountered in simple sentences about either emotional or neutral topics. Results from Experiment 1 indicated that participants were not significantly more accurate in responding to questions involving logical reasoning when the topic was neutral as opposed to emotional. Further, Experiment 2 did not find a significant effect of emotion; however, there were significant differences in interpretation as a function of the quantifier used. While results did not support our hypothesis, they suggest future areas to explore the effects of emotion and quantifiers in reasoning.