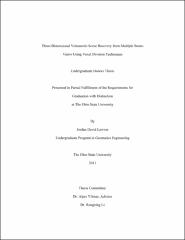 Traditionally, the reconstruction of three-dimensional (3D) scene models from multiple stereo images has required a set of matching feature points, such as building corners, across multiple viewpoints. These points are back-projected to triangulate at 3D positions (voxels) denoting their position in 3D space. These voxels are then used to generate 3D surfaces, thus creating a sparse 3D model in the object space. The sparsity of recovered voxels is an undesired byproduct of triangulation-based methods; an issue addressed using more recent volumetric techniques. As opposed to their triangulation-based counterparts, volumetric methods generate a dense 3D model and reduce the ambiguities in matching and triangulating points. Volumetric methods project all voxels from a grid in 3D space to each image plane using known camera parameters. Projected voxels containing similar color across multiple images are labeled opaque such that they lie on the 3D surface, whereas those voxels projecting to different colors are labeled transparent, representing emptiness in 3D space. The processing time for volumetric methods is considerably higher than triangulation-based methods, due to traversing all possible voxels on a dense 3D grid. Current published literature on volumetric methods primarily concentrates on metrics defining similarity of colors and visibility tests without consideration for high processing time requirements. In this research, this limitation has been addressed by employing a “divide and conquer” voxel- division algorithm. This approach initially assumes the bounding box around the object in the 3D scene as a single voxel projecting to the corresponding region across all stereo views. The similarity of visual features computed from the regions across the images is used to determine whether a higher granularity (i.e. dividing the current voxel into eight subvoxels) is necessary to accurately represent that area in object space. This recursive division is continued until an accurate representation of the voxel can be determined. Preliminary results show a reduction in processing time as much as 97% in some tests without a loss in recovered 3D quality. With this improvement, many deficiencies in existing practical applications using volumetric methods can be overcome, including but not limited to automated surveillance in 3D space, biomechanics research, and remotely monitored e-ICUs (electronic intensive care units).