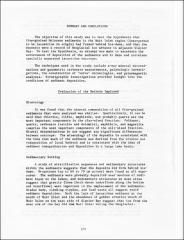 Glacier Bay, roughly 58°N to 59°N latitude and l36°W to 138°W longitude, experienced one of the most pronounced Neoglacial (late Holocene) ice advances in southeast Alaska. Previous field studies and physiographic arguments suggest that the west arm of the bay was filled by ice before the east arm, Muir Inlet, was filled. It has also been suggested that fine-grained clastic sediments within sequences of Holocene gravels in the Muir Inlet region record episodes of damming of the inlet by ice of the west arm. Exposures of these sediments were investigated from 1977 to 1979 in order to evaluate their environment of deposition and to correlate and date them. Stratification sequences and primary structures within the sediments suggest deposition in a lake or lakes into which ice-bergs actively discharged. The varied stratigraphic position of fine sediments within the Holocene sections allows the interpretation of more than one glacial advance. Mineralogically and palynologically the sediments all are quite similar. Varve counts obtained from rhythmically bedded silt-clay couplets failed to provide data useful for correlation purposes. The counts do suggest short (several hundred year) periods of lacustrine deposition at anyone site, provided the couplets are annual. The paleomagnetic signature of the deposits suggests at least two periods of lake formation (and therefore ice-damming). Radiocarbon dates and comparison to a dated magnetic record from southern Europe suggest ice advance and damming of Muir Inlet about 2900-2600 years BP. This was followed by a short retreat during which soil profiles developed on some lacustrine sediments. At 1700-1500 years BP, another advance and damming event occurred. An older advance in the west arm has been suggested at 4500-4200 years BP based on a radiocarbon date beneath glacial till, and a younger advance from 700-200 years BP resulted in furthest Neoglacial advance in Glacier Bay. However, neither of these events is represented in the lacustrine sediments of the Muir Inlet region.

Copyright 1982 by Robert Glenn Goodwin, used by permission of the author.