Cooperative endurance: A remarkable strategy adopted by symbiotic bacteria to persist in their nematode vector 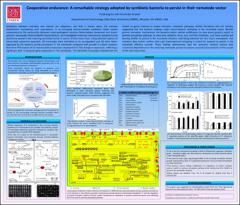 Symbioses between microbes and animals are ubiquitous, yet little is known about the intricate mechanisms maintaining such associations. In an emerging animal-microbe symbiosis model system represented by the partnership between insect-pathogenic bacteria Photorhabdus temperata and insect-parasitic nematodes Heterorhabditis bacteriophora, we investigated molecular mechanisms adopted by the bacteria to persist in the enduring nematode vector in search of their insect host. Using selective capture of transcribed sequences approach, 50 transcripts were identified to be up-regulated and 56 were down-regulated by the bacteria during persistence in the nematode compared with growth in culture medium. Real-time PCR analysis of 14 representative transcripts displayed 6-12 fold change in expression, reflecting a significant shift in bacterial gene expression in the nematode. The identified transcripts included but not limited to genes involved in proton transport, metabolic pathways, biofilm formation and cell motility, suggesting that the bacteria undergo major transcriptional reshaping in the nematode vector. Besides general starvation mechanisms, the bacteria induce cellular acidification to slow down growth, switch to pentose phosphate pathway to overcome oxidative stress and nutrition limitation, and shed motility but develop biofilm to persist in the nematode intestine until being released into the insect hemolymph. Our mutation data further confirm that such transcriptional reshaping is critical for bacteria to persist in the nematode infective juvenile. These findings demonstrate how the symbiotic bacteria reduce their nutritional dependence on the enduring nematode partner to ensure successful transmission of the couple to the next insect host.