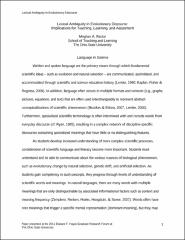 This study investigates lexical ambiguity in evolutionary discourse and explores the implications of such language for teaching, learning, and assessment. Specifically, this study investigated what students' mean when they use five terms that commonly occur in evolutionary explanations: pressure, select, adapt, need, and must. The study employed a new technological tool known as the Assessment Cascade System (ACS) to investigate the frequency with which undergraduate biology majors spontaneously incorporate lexically ambiguous language in evolutionary explanations, as well as their definitions and explanations of what they meant when they used such terms. Among the 1282 initial responses, 81% of students spontaneously used a multivalent term at least once in evolutionary explanations. Moreover, the majority of these initial responses were judged to be scientifically inaccurate, and accurate use of some terms was significantly correlated with students' course grade. While the scientific accuracy of the majority of student responses remained the same from initial to follow-up, a sizable minority of student response did not. Responses that were initially ambiguous were more likely to be resolved by use of the ACS follow-up prompts, resulting in an increased understanding of students' evolutionary explanations.