In Vitro and In Vivo Inhibition of Human Bladder Cancer by Broccoli Isothiocyanates: Characterization, Absorption, Metabolism and Interconversion 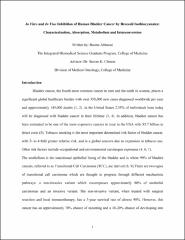 Transitional cell carcinoma of the urinary bladder is the fifth most common neoplasm and the twelfth leading cause of cancer death in the United States. In addition, bladder cancer is estimated to be the most expensive cancer to treat with $3.7 billion in direct costs and is of growing concern due to the expansion of global tobacco use, the main etiologic risk factor. There are two differing variants of this disease: a superficial and an invasive type. Epidemiologic evidence suggests that consumption of a diet rich in cruciferous vegetables, particularly broccoli, is associated with a lower bladder cancer risk. These vegetables contain high concentrations of glucosinolates (GLUs) that are enzymatically hydrolyzed to bioactive isothiocyanates (ITCs) by myrosinase. There is growing evidence that isothiocyanates have anti-cancer effects. Here, we first quantified glucosinolates and isothiocyanates found in broccoli and broccoli sprouts and showed evidence that broccoli and broccoli sprout isothiocyanate extracts can significantly inhibit both non-invasive (RT4) and invasive (J82, UMUC3) forms of human bladder cancer cells, with broccoli sprouts having significantly higher inhibition due to their higher ITC content. Of all the ITCs found in highest concentration in broccoli sprouts, sulforaphane (SFN) and erucin (ECN) have the greatest efficacy in inhibiting both non-invasive and invasive human bladder cancer cells, followed by allyl ITC and then iberin. In addition, normal human urothelial cells are less sensitive to the inhibitory effects of SFN and ECN followed by RT4, J82 and then UMUC3. SFN and ECN are shown to induce cell cycle arrest of both non-invasive and invasive bladder cancer cells in the G2/M phase. There is also a significant induction of apoptosis, as indicated by PARP cleavage and caspase 3/7 activity along with a downregulation of survivin protein. Next, we translated our in vitro findings in vivo utilizing a xenograft model with female athymic nude mice injected with 5 X 105 UMUC3 cells in both flanks. Mice were treated with either 4% freeze-dried broccoli sprouts, 2% freeze-dried broccoli sprouts extract; or gavaged daily with 295 µmol/kg sulforaphane or 295 µmol/kg erucin; for two weeks (n=12/group). Tumor weight of all treated groups was significantly lower than control (40% reduction or greater). A significant decrease in cell proliferation (Ki67) and induction of apoptosis (PARP) was observed in the broccoli sprout treated group. Absorption and bioavailability of sulforaphane and erucin metabolites was determined in mouse plasma by UPLC-MS/MS. Metabolites of sulforaphane and erucin were absent in control mice and present in plasma of all treated groups, with dietary and pure phytochemical treatments, resulting in similar plasma metabolite concentrations (micromolar range). N-acetyl cysteine conjugates were found at highest concentrations, followed by cysteinyl and glutathione conjugates and small amounts of detectable cysteinyl glycine conjugates and free SFN. Evidence of inter-conversion of sulforaphane and erucin was seen. Collectively, our data shows that broccoli isothiocyanates are readily absorbed and metabolized in the mouse and can inhibit human bladder cancer in vitro and in vivo. This supports further preclinical and clinical studies to determine broccoli isothiocyanates potential to help ameliorate the bladder cancer burden.