Word Frequency and Processing: Why the Brain Stores Some Words Whole and Others in Parts 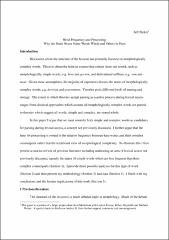 In this study I show evidence which suggests that how often a word occurs is instrumentally important in understanding how the mind stores and processes words; moreover, I suggest that the mind uses a previously undiscussed process of stripping parts from frequent complex words to recognize simpler and less frequent words found therein. This suggests an important interaction between word frequency and the structure of word storage in the mind. When processing a word, several factors affect how the word will be processed. For example, does the word contain multiple parts like govern-ment or is the word simple like govern? Research into processing of complex words, e.g. govern-ment, has focused on two opposing methods of access: storage and parsing (breaking the word into smaller meaning bearing parts). Most morphological theories assume that morphologically simple bases like govern and discern are stored, as are meaning bearing parts like -ment. Complex words such as govern-ment and discern-ment are therefore believed to be accessed by stripping -ment from the base and computing the meaning based on the two parts (Taft and Forster 1975). However, Hay (2001) argued that this story is incomplete, since words can differ greatly in how frequent they are compared to other related words. For example, government occurs over 107 times more often than govern in the British National Corpus, a collection of 100 million words of English text. On the other hand, discernment occurs only 0.22 times as often as discern. Hay (2001) showed that words that are more frequent than their bases, e.g. government, are likely to be stored as a whole unit. Conversely, complex forms that are less frequent than their bases, e.g. discernment bias towards being broken into parts during processing. Thus, infrequent complex words like discernment are dependent upon their bases in a way that frequent complex words like government are not. Various studies have validated and extended this hypothesis (Hay and Baayen 2002, Taft 2004). While these studies make predictions for how we process words like government, they are silent about how storing these words might affect their morphologically simpler but less frequent bases like govern. In other words, what happens to govern if its complex counterpart government is not dependant on it during processing? In particular, previous work neglects to consider whether less frequent bases like govern should become dependent on their more frequent derivatives like government for access. We might expect this to be the case, based on the prominent role frequency plays in processing. To test the possibility that simple words like govern are dependant of their complex counterparts like government I conducted a lexical decision task with 17 native speakers of Russian. Russian was used because of its rich morphological resources. During the task speakers were visually presented words and were asked to push a ‘yes’ button if the word was real or a ‘no’ button if the word was not. Fake words were intermingled among real words to ensure participants made a decision for every word. Reaction times were measured for each decision. For the words in question, a priming word was shown for 40 milliseconds before the target word appeared. For example, government might be shown before govern. If a word is dependant on another word for processing, a prime will facilitate processing. If the word is accessed independently there will be no facilitation from the prime. Priming was tested in all possible related combinations of simple/complex and frequent/infrequent. My results support previous research in that simple frequent words like discern facilitate the processing of less frequent words like discernment. This supports the explanation that discernment is being accessed in parts, discern + ment. My results also show that complex frequent words like government are stored independent of their bases, i.e. govern does not facilitate the access of government. Interestingly, the opposite was not true because words like government did facilitate the access of their simple infrequent bases like govern. This suggests that even though it is more complex, government acts as the base for govern. This result is striking because no previous study or analysis has suggested that complex words might serve as the base for a simple word during processing. To model this result I posit that the brain is undergoing a subtractive process when accessing these words. For example, as we can say that discernment is processed as discern + ment, we can say that govern is processed as government - ment. Though it has never been suggested for lexical processing, subtractive processes are not unrecognized in linguistics. For example, it is argued that the French feminine adjective blanche ‘white’ is the base of its masculine counterpart blanc (Haspelmath 2002). Likewise in English the word commune was formed by a mistaken analysis of community as complex, i.e. commune + ity, though such is historically inaccurate. Therefore, my proposed model has both theoretical support as well as experimental significance. In summary I show that not all words are stored equally in the mind. Words which are simple and infrequent are dependent on their complex counterparts during processing. To model this innovative finding I suggest that the mind uses a subtractive method during access of these words. This proposed model constitutes a significant contribution to our understanding of how (and what) the brain stores and processes during lexical access.