As Though Heard from Afar: Score Indications in Debussyste Compositions 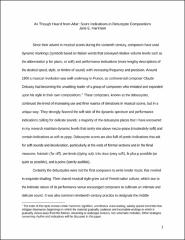 Since their advent in musical scores during the sixteenth century, composers have used dynamic markings (symbols based on Italian words that conveyed relative volume levels such as the abbreviation p for piano, or soft) and performance indications (more lengthy descriptions of the desired speed, style, or timbre of sound) with increasing frequency and precision. Around 1900 the debussyste composers continued the trend of increasing use and finer nuance of directions in musical scores, but in a unique way. They strongly favored the soft side of the dynamic spectrum and performance indications calling for delicate sounds, such as lointain (far off), perdendo (dying out), très doux (very soft), le plus p possible (as quiet as possible), and à peine (barely audible). These distinguishing and pervasive directions written into their musical scores indicate that Debussy and the composers influenced by him were inspired by similar aesthetic goals. I extract the most common poetic indications in the piano scores of Debussy and Maurice Ravel, two of the most influential debussystes, and situate them as well as the predilection for soft and subdued pieces in aesthetic and philosophical trends of the time. The roots of this stylistic practice trace back to the slightly earlier theories of Francophone Symbolists such as Stephan Mallarmé, Albert Samain, and Maurice Maeterlinck, who sought to create delicate atmospheres of monotony and melancholy, because it was an artist in this state and free of superfluous emotional extremes that could produce the most authentic translations of the soul, or interior mental life. Drawing upon the insights of Jann Pasler and Jessie Fillerup, I further suggest that the debussystes’ musical style responded to theories about the functioning of the human mind that were formulated around 1900 by philosophers such as Henri Bergson and Charles Henry. I argue that the debussystes portrayed in their compositions both philsophers’ descriptions of the mind, which were widely known among artists in early twentieth-century France, and that score indications helped to accomplish this. Scholars have long noted Debussy’s predilection for soft dynamics and melancholy themes, but have not accounted for them. My research explains why Debussy was so attracted to soft as well as slow sounds, and it reveals that his novel score indications inspired dozens of other French composers, who were similarly fascinated by the glimpses into the human mind offered by Symbolist literature and contemporaneous philosophy.