Human Growth, Environmental Stress, and the Costs of Reproduction 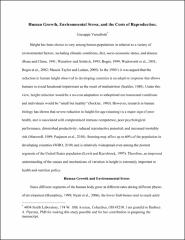 Variation in height and body proportions is relatively well understood at the inter-population level, but less is known about variation within groups. This study explores intra-population variation in body proportions among 172 (88 female; 84 male) rural Amazonians. The following hypotheses were tested: 1) stunting is associated with changes in body proportions; 2) males and females respond differently to similar environmental stressors and 3) female growth is negatively affected by the costs of reproduction. Height, sitting height and total leg length were examined in different population subsamples in relation to biocultural factors. Differences in proportions were examined using the Quick-Test (Tsutakawa and Hewett, 1977) on Reduced Major Axis regression plots; correlation analyses were employed to detect associations between anthropometric data and female reproductive history parameters. The results indicate that growth was more compromised among females rather than males, as proven by the existence of significantly different body proportions between sex subsamples (p = 0.01). Specifically, females tended to have relatively shorter legs than males. Within sex samples, stunting was not associated with significant changes in body proportions among males (p = 0.50), while significant differences were found among females (p = 0.01). The differences were due to relatively shorter legs among stunted individuals, in agreement with expectations. Among all reproductive history parameters, only age at first birth was significantly correlated with the anthropometric variables. Specifically, positive correlations were found between age at first birth and height (r = 0.29; p = 0.01), and age at first birth and total leg length (r = 0.41; p = 0.001). Biocultural information and analyses’ results suggest that the less desirable growth outcome in females may be due to the costs associated with reproduction. In particular, early female reproduction appears to compromise growth by increasing nutritional stress (due to the energetic costs of pregnancy and lactation) and impeding catch-up growth. This is the first study that reports the long-term impact of early reproduction on women’s growth outcome. Given the increasing number of adolescent pregnancies, especially among disadvantaged groups, these results stress the importance of providing proper attention and care to adolescent mothers to attenuate growth retardation and its associated health risks.