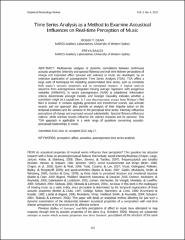 Multivariate analyses of dynamic correlations between continuous acoustic properties (intensity and spectral flatness) and real-time listener perceptions of change and expressed affect (arousal and valence) in music are developed, by an extensive application of autoregressive Time Series Analysis (TSA). TSA offers a large suite of techniques for modeling autocorrelated time series, such as constitute both music’s acoustic properties and its perceptual impacts. A logical analysis sequence from autoregressive integrated moving average regression with exogenous variables (ARIMAX), to vector autoregression (VAR) is established. Information criteria discriminate amongst models, and Granger Causality indicates whether a correlation might be a causal one. A 3 min electroacoustic extract from Wishart’s Red Bird is studied. It contains digitally generated and transformed sounds, and animate sounds, and our approach also permits an analysis of their impulse action on the temporal evolution and the variance in the perceptual time series. Intensity influences perceptions of change and expressed arousal substantially. Spectral flatness influences valence, while animate sounds influence the valence response and its variance. This TSA approach is applicable to a wide range of questions concerning acoustic- perceptual relationships in music.