Lure(d) into listening: The potential of cognition-based music information retrieval 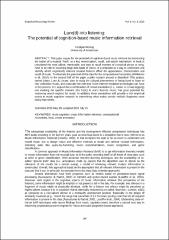 This paper argues for the potential of cognition-based music retrieval by introducing the notion of a musical ‘hook’ as a key memorization, recall, and search mechanism. A hook is considered the most salient, memorable, and easy to recall moment of a musical phrase or song. Next to its role in searching large data-bases of music, it is proposed as a way to understand and identify which cognitively relevant musical features affect the appreciation, memorization and recall of music. To illustrate the potential of this idea for the computational humanities (Willekens et al., 2010), in the second half of the paper a pilot research project is described. This project, named Listen, Lure & Locate, aims to study the cultural phenomenon of being lured to listen to new unfamiliar music, and especially the role that recent internet-mediated technologies can have in this process. It is argued that a combination of crowd annotation (i.e., social- or crowd-tagging) and marking the specific moment (the hook) in one’s favorite music, has great potential for improving search engines for music. In addition, these annotations will provide a rich empirical source to music cognition research in determining what makes certain melodic fragments more sticky than others.