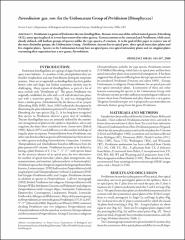 Peridinium is a genus of freshwater thecate dinoflagellate. Because it was one of the earliest named genera (Ehrenberg 1832), many species placed in it were later removed to other genera. Genera continue to be extracted and Peridinium, while more closely defined, still harbors groups of species unlike the type species, P. cinctum. It is the goal of this paper to remove one of the most dissimilar groups, the Umbonatum Group. Peridinium cinctum has no apical pore, three apical intercalary plates and five cingular plates. Species in the Umbonatum Group have an apical pore, two apical intercalary plates and six cingular plates warranting their separation into a new genus, Parvodinium.