Population Structure of Coyote (Canis latrans) in the Urban Landscape of the Cleveland, Ohio Area 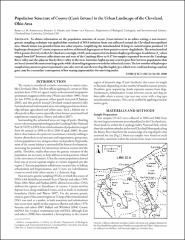 To obtain information on the population structure of coyote (Canis latrans) in an urban setting, a non-invasive genetic sampling technique was applied that consisted of DNA isolation from scat collected around the Cleveland metropolitan area. Muscle tissue was provided from two other coyotes. Amplifying the mitochondrial D-loop or control region produced 33 haplotypes from just 57 coyote sequences and two additional dog sequences from putative coyote-dog hybrids. The mitochondrial DNA genetic diversity in the Cleveland area was high, π 0.02, and composed of six distinct haplotype lineages. In addition, Fst values ranged from 0.07 between collections east and west of the Cuyahoga River to 0.17 for samples separated between the Cuyahoga River valley and the adjacent Rocky River valley to the west. Interstate highways may restrict gene flow between populations that are based around the numerous large parks while channeling migrants towards the urbanized center. The low number of haplotypes sampled may attest to a poor reproductive rate after arrival, and the two dog-like haplotypes, which were confirmed using a nuclear gene, may be a secondary consequence of low mating opportunities for surviving males.