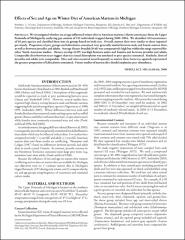 We investigated whether sex or age influenced winter diet in American martens (Martes americana) from the Upper Peninsula of Michigan by analyzing gut content of 151 individuals trapped during 2000–2004. We identified 433 occurrences of 10 prey species and classified them into six groups based on body size. Overall, marten diets were similar to those reported previously. Proportion of prey groups and kilocalories consumed were generally similar between male and female marten diets, as well as between juveniles and adults. Average dietary breadth (0.46) was comparatively high but within the range reported for other North American studies. Dietary overlap (0.99) was high between males and females and between juveniles and adults. Comparable diets between sexes suggest that size sexual dimorphism was unrelated to prey species consumed. Similarly, diets of juveniles and adults were comparable. Mice and voles occurred most frequently in marten diets; however, squirrels represented the greatest proportion of kilocalories consumed. Future studies of marten diet should emphasize prey abundance.