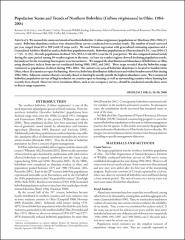 We assessed the status and trends of northern bobwhite (Colinus virginianus) populations in Ohio from 1984-2004 (21 years). Bobwhite abundance indices were obtained from surveys conducted on secondary roads. The number of roads surveyed per year ranged from 69 to 209 (with 12 stops each). We used Poisson regression with generalized estimating equations and a Generalized Additive Model to analyze bobwhite population trends. Bobwhite populations in Ohio declined 9.3% / year (95% CI=7.3%-11.2%). Overall, populations declined 76% (95% CI=68-82%) over the 21-year period. We also compared annual trends during the same period among 10 weather regions in the state. At least six weather regions showed declining population trends, but analyses for the remaining four regions were inconclusive. We mapped the distribution and abundance of bobwhites in Ohio using abundance indices from surveys conducted during 1985, 1992, and 2002. These maps revealed that the bobwhite range contracted as populations declined during 1984-2004. The current core area of bobwhite abundance is located in Southwestern Ohio, where 16 counties are open for hunting. However, bobwhite distribution shifted eastward within Southwestern Ohio during 1984-2004. Adjacent counties that are currently closed to hunting lie mostly outside the highest abundance zone. We recommend bobwhite population surveys of high resolution on counties open to hunting, as well as surrounding counties where hunting has recently been closed. However, lower resolution efforts, such as site occupancy surveys, should be conducted outside those areas to detect range expansion