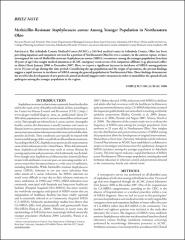 The Ashtabula County Medical Center (ACMC), a 241-bed medical center in Ashtabula County, Ohio, has been providing inpatient and outpatient services for a portion of Northeastern Ohio for over a century. In the current report, we have investigated the rate of Methicillin-resistant Staphylococcus aureus (MRSA) occurrence among the younger population (less than 25 years of age) who sought medical attention at ACMC emergency room or one of its outpatient-affiliates (e.g. physician’s office or clinics) from January 2006 to December 2007. Here, we report a significant increase in incidence of MRSA among patients six to 25 years of age during this time period. Considering the age population and the origin of specimens, the present findings suggest a rapid increase in incidence of MRSA among the general population in Northeastern Ohio. These findings demonstrate the need for the development of new protocols aimed at identifying preventive measures in order to immobilize the spread of such pathogens among the younger population in the region.