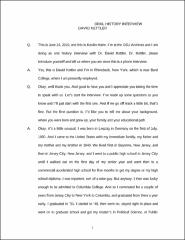 David Kettler was born in Leipzig, Germany on July 1, 1930, and arrived in America with his parents and brother in 1940. After completing his master’s degree in public law and government at Columbia University, he arrived at Ohio State in the autumn of 1955 to teach political science. Kettler received tenure after completing his Ph.D. in 1960 and was promoted to full professor in 1967. Kettler witnessed many changes within the department of political science leading up to the student riots of 1970. Kettler explains his actions as a faculty member during the riots, and why he was threatened with a million-dollar lawsuit over his alleged participation in the riots. He goes on to describe the lasting effects of the riots on his post-OSU career.