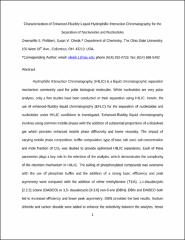 While polar analytes such as peptides, nucleic acids or nucleotides are essential in biochemistry and pharmaceutical research, their separation has long been a challenge. The development of Hydrophilic Interaction Chromatography (HILIC) in the last 20 years has revolutionized the separation of polar biological compounds and has become a widely used chromatographic technique in pharmaceutical and biochemical research. HILIC, also referred to as aqueous normal phase chromatography, is similar to normal phase in that the analytes are eluted in increasing polarity order, but the mobile phase is quite different as it uses a portion of aqueous phase mixed in a miscible solvent instead of a pure organic solvent. It is believed that when a mobile phase composed of water and water-miscible organic solvent is used on a polar stationary phase, a water-enriched layer is immobilized at the surface of the stationary phase; polar analytes will be retained longer than less polar analytes within that water-layer. The partitioning between the immobilized layer (at the surface of the stationary phase) and the bulk of the mobile phase will cause the compounds to be eluted in different fractions. Acetonitrile is an ideal solvent for HILIC because it is water-miscible yet possesses very weak hydrogen bonding properties, allowing for the water-enriched layer to form at the surface of the stationary phase. While other solvents have been studied, none has achieved the same quality of separation: it is believed that alcohols are too polar and disrupt the formation of the water layer, hence preventing the partitioning of the analytes. HILIC separations using alcohol as a weak eluent often show lack of retention and thus, poor resolution. Nevertheless, acetonitrile is ranked by the Unites States Environmental Protection Agency (EPA) as a hazardous solvent for its waste produces nitrogen dioxide which is responsible for acid rain. Furthermore, following a recent significant shortage of acetonitrile, its price has increased eight-fold, making it an expensive solvent to use. Finding an alternative solvent to acetonitrile in HILIC would be crucial to solve both economic and ecological issues.3 To date, a cleaner solvent which proves to be as universal and efficient as acetonitrile has not been found. In the work presented here, CO2 is studied as an alternative weak solvent for HILIC in enhanced-fluidity liquid chromatography (EFLC), which uses an enhanced-fluidity liquid (EFL) as mobile phase. These distinctive liquids are mixtures that contain high proportions of liquefied gases such as carbon dioxide. EFLs display the combined advantages of both liquids and supercritical fluids: they have higher diffusion coefficient and lower viscosity than liquids, resembling supercritical fluids. However, unlike supercritical fluids, the solvent strength of EFLs, which corresponds to the ability of the solvent to elute an analyte and is often directly related to its polarity, is comparable to commonly used liquids. Maintaining the solvent strength is essential to maintain the interaction between the mobile phase and the analytes during separation. Nucleosides and nucleotides will be used as an example of a possible application of Hydrophilic Interaction enhanced-fluidity liquid chromatography. These building blocks of nucleic acids play an important role in the regulation of hormone or enzyme activity as well as metabolic processes. Separation and quantification of these compounds are crucial in biochemistry and pharmaceutical research in order to understand their role in biological systems. Their analogs are also used in numerous medical applications including chemotherapy, thus highlighting their substantial value in healthcare and the biotechnology market. The separation of Adenosine, Cytidine, Guanosine, Uridine and their monophosphate nucleotides was optimized by modifying the proportion of CO2 and salt added to the methanol/aqueous mobile phase. Excellent selectivity and resolution was reached and the eight compounds were separated in 10 minutes only. This successful separation proved that the ternary mixture methanol/CO2/water used as the mobile phase in HILIC is a valid alternative to acetonitrile/water. Hydrophilic Interaction EFLC is highly promising as it provides similar or superior selectivity and efficiency as current techniques and is, at the same time, more economical and environmentally-friendly. Further study and separation of a higher number of compounds will be done to further support the usefulness of this new technique.