Why Couldn't Bert Williams Play Othello: The Denial of Self-Definition of a "Nobody" 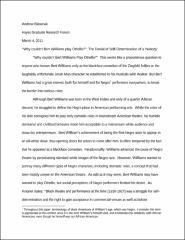 Why Couldn’t Bert Williams Play Othello?: Belasco, Bert and Blackface Bert Williams is often a controversial figure in the history of Blackface performance. As he was of West Indian descent, he crafted his blackface character as an outsider: "I have studied him; his joys and sorrows…I must study his movements. I have to. He is not in me." However, he was a staunch supporter for expanded opportunities for African Americans. His productions with George Walker produced shows for mostly African American actors and dancers. He founded a movie studio for the production of African American films for African American actors. He was the first dark-skinned performer to appear with an all-white-skinned cast through his performances at the Ziegfield Follies. But still, his progress is tainted by the perception that he perpetuated white stereotypes of African-Americans. Williams’s repeated and frustrated ambition throughout his career, however, was to portray a character with his skin town with honest pathos. Bert Williams almost had the opportunity to fulfill this dream when David Belasco recruited him to star in a play that he would develop specifically for Williams. Belasco noted how Ira Aldrige’s performance of Othello inspired him to consider using an African American in a dramatic role as part of his quest for "novelties," as he had done with David Warfield to make a sympathetic Jew. But, during the process, Williams became anxious, to the point of illness, and quit. Little else is said, but several of his friends conjectured that he did not want to break his contract with Flo Ziegfield. Belasco’s intense, Pygmalion-style training, however, may have been at odds with Williams’ aim of self-definition. I propose that Belasco may have, like the rest of white society, demanded that he play a role that simply was not true to his experience. Bert Williams was a particular product of the early Harlem Renaissance and the budding acceptance of a talented, professional, African American performer in 1910s New York. He forged pathways for other African Americans to portray non-comedic characters of their own race, but because he did so within a white hegemony he maintains the stigma of a man who "sold-out." His encounter with David Belasco may illustrate the incredible pressure he had not to offend anybody, but it may reveal the inability of Belasco to see past the exoticism of the blackface tradition and conceptions of African Americans to allow Williams to develop his own dream role.