Structural Determinants of a Positive Campus Climate for Sexual Minorities 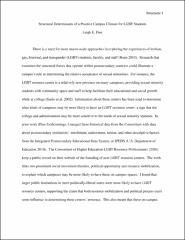 Most studies of the interaction between lesbian, gay, bisexual, and transgender (LGBT) persons and the American college campus environment have been confined to the micro-level. However, little is known about factors at the institutional level that could affect the campus climate. By merging data from three sources, variables from 1,432 institutions were analyzed, with 221 uncensored observations on the dependent variable. A Heckman selection model, which controls for selection into the voluntary survey instrument used to measure the dependent variable, was run to determine the link between institutional factors and a school’s climate toward sexual minorities as measured by the Campus Climate Index. Results indicate that a higher percentage of women, a more liberal political milieu, and a lower student-to-faculty ratio are associated with a more positive climate for LGBT persons, suggesting that macro-level factors exert an influence.