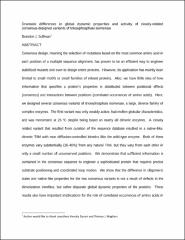 Consensus design, meaning the selection of mutations based on the most common amino acid in each position of a multiple sequence alignment, has proven to be an efficient way to engineer stabilized mutants and even to design entire proteins. However, its application has mainly been limited to small motifs or small families of related proteins. Also, we have little idea of how information that specifies a protein’s properties is distributed between positional effects (consensus) and interactions between positions (correlated occurrences of amino acids). Here, we designed several consensus variants of triosephosphate isomerase, a large, diverse family of complex enzymes. The first variant was only weakly active, had molten globular characteristics, and was monomeric at 25 ºC despite being based on nearly all dimeric enzymes. A closely related variant that resulted from curation of the sequence database resulted in a native-like, dimeric TIM with near diffusion-controlled kinetics like the wild-type enzyme. Both of these enzymes vary substantially (30-40%) from any natural TIM, but they vary from each other in only a small number of unconserved positions. We demonstrate that sufficient information is contained in the consensus sequence to engineer a sophisticated protein that requires precise substrate positioning and coordinated loop motion. We show that the difference in oligomeric states and native-like properties for the two consensus variants is not a result of defects in the dimerization interface, but rather disparate global dynamic properties of the proteins. These results also have important implications for the role of correlated occurrences of amino acids in specifying protein properties, the ability of TIM to function as a monomer, and the ability of molten globular proteins to carry out complex reactions.