Time Not Ripe: Black Women’s Quest for Citizenship and the Battle to End Jim Crow at The Ohio State University 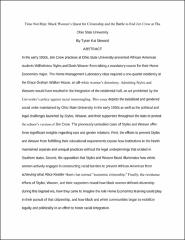 In the early 1930s, Jim Crow practices at Ohio State University prevented African American students Wilhelmina Styles and Doris Weaver from taking a mandatory course for their Home Economics major. The Home Management Laboratory class required a one-quarter residency at the Grace Graham Walker House, an all-white women’s dormitory. Admitting Styles and Weavers would have resulted in the integration of the residential hall, an act prohibited by the University’s policy against racial intermingling. This essay depicts the racialized and gendered social order maintained by Ohio State University in the early 1930s as well as the political and legal challenges launched by Styles, Weaver, and their supporters throughout the state to protest the school’s version of Jim Crow. The previously unstudied cases of Styles and Weaver offer three significant insights regarding race and gender relations. First, the efforts to prevent Styles and Weaver from fulfilling their educational requirements expose how institutions in the North maintained separate and unequal practices without the legal underpinnings that existed in Southern states. Second, the opposition that Styles and Weaver faced illuminates how white women actively engaged in constructing racial barriers to prevent African American from achieving what Alice Kessler-Harris has termed “economic citizenship.” Finally, the resistance efforts of Styles, Weaver, and their supporters reveal how black women defined citizenship during this bigoted era, how they came to imagine the role Home Economics training could play in their pursuit of that citizenship, and how black and white communities began to mobilize legally and politically in an effort to foster racial integration.