The Changing Psychology of the Civil War Soldier: From Farmboys to Killers: Summer of 1862 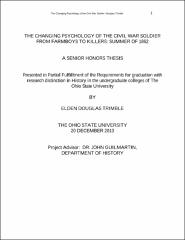 It is the contention of the author that the high casualty rates of the battles of the late summer of 1862 in the Eastern Theatre of the American Civil War were fueled by anger on the parts of both Northern and Southern Troops. These troops, for different reasons, became angry during the months of late 1861 and early 1862 and when the campaign season began, the soldiers went into battle with revenge and hatred in their minds.