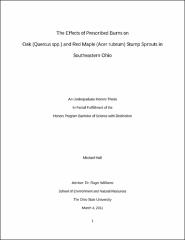 Oak (Quercus spp.) regeneration within Ohio's forests is a current concern for land managers. The sprouts of oak are being lost during the stem-exclusion stage of forest succession with species such as red maple (Acer rubrum) replacing the historically dominant oaks. Many wildlife species rely on the hard mast oak acorns to get them through the winter season, and with a reduction of overstory oak, it is probable that these wildlife species will face additional stresses. Attempts to increase the regeneration of oak have resulted in the use of prescribed burns alone, as well as prescribed burns in conjunction with overstory thinnings. Many of the experiments examining these treatments focus on the responses of single sprouts and do not address the clusters of sprouts that form from the base of harvested stumps. Studies examining the effects of these treatments specifically on stump sprouts of oak and red maples have not been discovered by the author, with either few or no such previous studies existing. In this study, two forests were thinned with half of the harvested area being burned in the spring, and the other half burned in the fall. The differences in burn season has been shown to produce variances in fire intensities, which might have affected stump sprouts in different manners. Both the fire behavior, as well as each sprout's response to the burns were studied for this experiment. While the expected outcome was to find a more intense fire in the fall, there was no significant difference between the spring and fall burns. Oak, both in the red and white oak species groups, were expected to have an increase in stump response, while red maple was expected to create more re-sprouts than either oak group. This was observed for the white oak species group, but the red oak group was found to respond more negatively than not only the white oak group, but also more surprisingly, the red maple sprouts. A single prescribed burn, three years after harvest, was found to benefit red maples more than anticipated, possibly suggesting that additional burns may be necessary when regeneration of stump sprouts is the land manager's goal.