A New Network For Higher-Temperature Gas-Phase Chemistry. I. A Preliminary Study of Accretion Disks in Active Galactic Nuclei 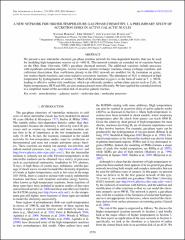 We present a new interstellar chemical gas-phase reaction network for time-dependent kinetics that can be used for modeling high-temperature sources up to ≈800 K. This network contains an extended set of reactions based on the Ohio State University (OSU) gas-phase chemical network. The additional reactions include processes with significant activation energies, reverse reactions, proton exchange reactions, charge exchange reactions, and collisional dissociation. Rate coefficients already in the OSU network are modified for H_2 formation on grains, ion-neutral dipole reactions, and some radiative association reactions. The abundance of H_2O is enhanced at high temperature by hydrogenation of atomic O. Much of the elemental oxygen is in the form of water at T ≥ 300 K, leading to effective carbon-rich conditions, which can efficiently produce carbon-chain species such as C_2H_2. At higher temperatures, HCN and NH_3 are also produced much more efficiently. We have applied the extended network to a simplified model of the accretion disk of an active galactic nucleus.