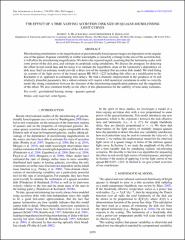 Microlensing perturbations to the magnification of gravitationally lensed quasar images are dependent on the angular size of the quasar. If quasar variability at visible wavelengths is caused by a change in the area of the accretion disk, it will affect the microlensing magnification. We derive the expected signal, assuming that the luminosity scales with some power of the disk area, and estimate its amplitude using simulations. We discuss the prospects for detecting the effect in real-world data and for using it to estimate the logarithmic slope of the luminosity's dependence on disk area. Such an estimate would provide a direct test of the standard thin accretion disk model. We tried fitting six seasons of the light curves of the lensed quasar HE 0435–1223 including this effect as a modification to the Kochanek et al. approach to estimating time delays. We find a dramatic improvement in the goodness of fit and relatively plausible parameters, but a robust estimate will require a full numerical calculation in order to correctly model the strong correlations between the structure of the microlensing magnification patterns and the magnitude of the effect. We also comment briefly on the effect of this phenomenon for the stability of time-delay estimates.