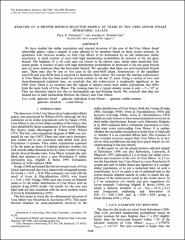 We have studied the stellar population and internal structure of the core of the Ursa Minor dwarf spheroidal galaxy, using a sample of stars selected to be members based on their proper motions. In agreement with previous studies, we find Ursa Minor to be dominated by an old, metal-poor stellar population. A small number of stars with high membership probabilities lie redward of the red giant branch. The brightest (V ~< 18) such stars are known to be carbon stars, rather than metal-rich first-ascent giants. A number of stars with high membership probabilities lie blueward of the red giant branch and are more luminous than the horizontal branch. We speculate that these are post-horizontal branch stars. There may also be one or two stars in the post-AGB phase. Spectroscopy of the candidate post-HB and post-AGB stars is required to determine their nature. We recover the internal substructure in Ursa Minor that has been noted by several authors in the last 15 years. Using a variety of two- and three-dimensional statistical tests, we conclude that this substructure is statistically significant at the 0.005 level. There is no evidence that the regions of density excess have stellar populations that differ from the main body of Ursa Minor. The crossing time for a typical density excess is only ~5 × 10^6 yr. They are therefore clearly not due to intermediate age star-forming bursts. We conclude that they are instead due to tidal interactions between the Galaxy and Ursa Minor.