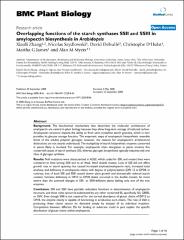 Background: The biochemical mechanisms that determine the molecular architecture of amylopectin are central in plant biology because they allow long-term storage of reduced carbon. Amylopectin structure imparts the ability to form semi-crystalline starch granules, which in turn provides its glucose storage function. The enzymatic steps of amylopectin biosynthesis resemble those of the soluble polymer glycogen, however, the reasons for amylopectin's architectural distinctions are not clearly understood. The multiplicity of starch biosynthetic enzymes conserved in plants likely is involved. For example, amylopectin chain elongation in plants involves five conserved classes of starch synthase (SS), whereas glycogen biosynthesis typically requires only one class of glycogen synthase. Results: Null mutations were characterized in AtSS2, which codes for SSII, and mutant lines were compared to lines lacking SSIII and to an Atss2, Atss3 double mutant. Loss of SSII did not affect growth rate or starch quantity, but caused increased amylose/amylopectin ratio, increased total amylose, and deficiency in amylopectin chains with degree of polymerization (DP) 12 to DP28. In contrast, loss of both SSII and SSIII caused slower plant growth and dramatically reduced starch content. Extreme deficiency in DP12 to DP28 chains occurred in the double mutant, far more severe than the summed changes in SSII- or SSIII-deficient plants lacking only one of the two enzymes. Conclusion: SSII and SSIII have partially redundant functions in determination of amylopectin structure, and these roles cannot be substituted by any other conserved SS, specifically SSI, GBSSI, or SSIV. Even though SSIII is not required for the normal abundance of glucan chains of DP12 to DP18, the enzyme clearly is capable of functioning in production such chains. The role of SSIII in producing these chains cannot be detected simply by analysis of an individual mutation. Competition between different SSs for binding to substrate could in part explain the specific distribution of glucan chains within amylopectin.