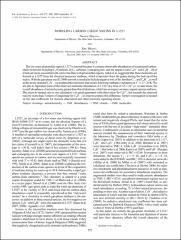 The low-mass protostellar region L1527 is unusual because it contains observable abundances of unsaturated carbon-chain molecules including C_nH radicals, H_2C_n carbenes, cyanopolyynes, and the negative ions C_4H− and C_6H−, all of which are more associated with cold cores than with protostellar regions. Sakai et al. suggested that these molecules are formed in L1527 from the chemical precursor methane, which evaporates from the grains during the heat-up of the region. With the gas-phase osu.03.2008 network extended to include negative ions of the families C −_n, and C_nH−, as well as the newly detected C_3N−, we modeled the chemistry that occurs following methane evaporation at T approx 25–30 K. We are able to reproduce most of the observed molecular abundances in L1527 at a time of ≈5 × 10^3 yr. At later times, the overall abundance of anions become greater than that of electrons, which has an impact on many organic species and ions. The anion-to-neutral ratio in our calculation is in good agreement with observation for C_6H−, but exceeds the observed ratio by more than 3 orders of magnitude for C_4H−. In order to explain this difference, further investigation is needed on the rate coefficients for electron attachment and other reactions regarding anions.