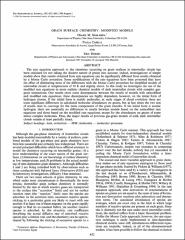 The rate equation approach to the chemistry occurring on grain surfaces in interstellar clouds has been criticized for not taking the discrete nature of grains into account. Indeed, investigations of simple models show that results obtained from rate equations can be significantly different from results obtained by a Monte Carlo procedure. Some modifications of the rate equations have been proposed that have the effect of eliminating most of the differences with the Monte Carlo procedure for simplified models of interstellar clouds at temperatures of 10 K and slightly above. In this study we investigate the use of the modified rate equations in more realistic chemical models of dark interstellar clouds with complex gas-grain interactions. Our results show some discrepancies between the results of models with unmodified and modified rate equations; these discrepancies are highly dependent, however, on the initial form of hydrogen chosen. If the initial form is mainly molecular, at early stages of cloud evolution there are some significant differences in calculated molecular abundances on grains, but at late times the two sets of results tend to converge for the main components of the grain mantles. If the initial form is atomic hydrogen, there are essentially no differences in results between models based on the unmodified rate equations and those based on the modified rate equations, except for the abundances on grains of some minor complex molecules. Thus, the major results of previous gas-grain models of cold, dark interstellar clouds remain at least partially intact.