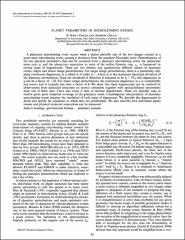 A planetary microlensing event occurs when a planet perturbs one of the two images created in a point-mass microlensing event, causing a deviation from the standard Paczyński curve. Determination of the two physical parameters that can be extracted from a planetary microlensing event, the planet/star mass ratio q, and the planet/star separation in units of the stellar Einstein ring, y_p, is hampered by several types of degeneracies. There are two distinct and qualitatively different classes of planetary events: major and minor image perturbations. For major image perturbations, there is a potentially crippling continuous degeneracy in q which is of order δ^−1_d, where δ_d is the maximum fractional deviation of the planetary perturbation. Since the threshold of detection is expected to be δ_d ~ 5%, this degeneracy in q can be a factor of ~20. For minor image perturbations, the continuous degeneracy in q is considerably less severe, and is typically less than a factor of 4. We show that these degeneracies can be resolved by observations from dedicated telescopes on several continents together with optical/infrared photometry from one of these sites. There also exists a class of discrete degeneracies. These are typically easy to resolve given good temporal coverage of the planetary event. Unambiguous interpretation of planetary microlensing events requires the resolution of both types of degeneracy. We describe the degeneracies in detail and specify the situations in which they are problematic. We also describe how individual planet masses and physical projected separations can be measured.