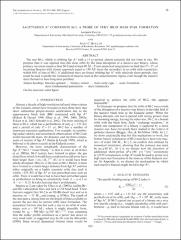 The star S0-2, which is orbiting Sgr A* with a 15 yr period, almost certainly did not form in situ. We propose that it was injected into this close orbit by the tidal disruption of a massive-star binary, whose primary was more massive than S0-2 and at least 60 Msun. From numerical integrations we find that 1%-2% of incoming binaries with closest approach equal to 130 AU leave the secondary in an orbit with eccentricity within 0.01 of that of S0-2. If additional stars are found orbiting Sgr A* with relatively short periods, they could be used to probe the formation of massive stars in the Galactocentric region, even though the massive stars themselves have long since perished.