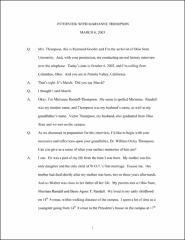 Marianne Randall married Victor Thompson. Dr. William Oxley Thompson was her grandfather. Her parents lived within walking distance of the president’s house on 17th Avenue. She often had Sunday dinners with her grandparents. Dr. Thompson would take the grandchildren with him on long train trips. As a minister, he often gave sermons at the Indianola Presbyterian Church. He performed marriages for many alumni. Dr. Thompson believed in “education for the common man.” He would not talk about his past but was always interested in the present and the future. He was an excellent teacher, an interested listener, and an effective negotiator. Marianne describes student life at OSU during the Great Depression. She was involved in many musical events because she was a music major. She included some of the professors that her husband considered outstanding. She was impressed that Dean Alfred Vivian loaned his record collection to WOSU. She did not remember much racial or national diversity as a student. To her grandfather, “every human being was special.” He made each person feel special by sending cards and letters.