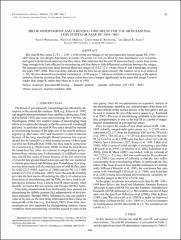 The mid-IR flux ratios F_A/F_B = 2.84 ± 0.06 of the two images of the gravitationally lensed quasar HE 1104-1805 show no wavelength dependence to within 3% across 3.6-8.0 μm, show no time dependence over 6 months, and agree with the broad emission-line flux ratios. This indicates that the mid-IR emission likely comes from scales large enough to be little affected by microlensing and that there is little differential extinction between the images. We measure a revised time delay between these two images of 152.2^+2.8_-3.0 (1 σ) days from R- and V-band data covering the years 1997-2006. This time delay indicates that the lens has an approximately flat rotation curve over scales of 1-2R_e. We also observed uncorrelated variations of ~0.05 mag yr^-1, which we attribute to microlensing of the optical emission from the accretion disk. The optical colors have also changed significantly in the sense that image A is now redder than image B, rather than bluer, as it was in 1993.