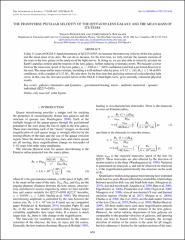 Using 11 years of OGLE V-band photometry of Q2237+0305, we measure the transverse velocity of the lens galaxy and the mean mass of its stars. We can do so because, for the first time, we fully include the random motions of the stars in the lens galaxy in the analysis of the light curves. In doing so, we are also able to correctly account for Earth's parallax motion and the rotation of the lens galaxy, further reducing systematic errors. We measure a lower limit on the transverse speed of the lens galaxy, v_t > 338 km s^-1 (68% confidence) and find a preferred direction to the east. The mean stellar mass estimate, including a well-defined velocity prior, is 0.12 ≤ (M/Msun) ≤ 1.94 at 68% confidence, with a median of 0.52 Msun. We also show for the first time that analyzing subsets of a microlensing light curve, in this case the first and second halves of the OGLE V-band light curve, gives mutually consistent physical results.