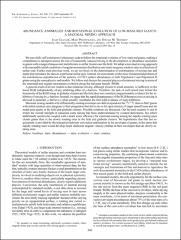 We use a fully self-consistent evolutionary code to follow the rotational evolution of low-mass red giants, making a comprehensive attempt to assess the role of rotationally induced mixing in the development of abundance anomalies in giants with a range of masses and metallicities in stellar clusters and the field. We adopt a maximal mixing approach with reasonable initial conditions of angular momentum distribution and main-sequence rotation rates as a function of stellar type. Unlike most previous work, we do not focus on the determination of combinations of mixing rate and depth that reproduce the data on a particular stellar type. Instead, we concentrate on the more fundamental problem of the simultaneous reproduction of the patterns of CNO surface abundances in both Population I and Population II giants using the same physics and models. We follow and discuss the essential physics of rotational mixing in terms of the structural and angular momentum evolution along the red giant branch (RGB). A general result of all our models is that rotational mixing, although present in small amounts, is inefficient on the lower RGB independently of any inhibiting effect of μ-barriers. Therefore, the lack of well-mixed stars before the luminosity of the RGB bump in globular clusters and the field does not constitute unquestionable evidence for the inhibition of mixing by μ-barriers. Instead, we argue that the rapid disappearance of the RGB bump as soon as mixing is allowed to penetrate μ-barriers is what actually constitutes the first solid evidence of such inhibition. Maximal mixing models with differentially rotating envelopes are able to reproduce the ^12C / ^13C data on M67 giants with initial rotation rates adequate to their progenitors but fail to do so for open clusters of larger turnoff mass and for metal-poor giants in the field and globular clusters. Possible solutions are discussed. Our favored scenario is one in which the overall strength of canonical extra mixing has been underestimated by existent derivations, but which additionally needs to be coupled with a much lower efficiency for rotational mixing among the rapidly rotating open cluster giants than in the slowly rotating ones in the field and globular clusters. We hypothesize that this last requirement is provided by the interaction between convection and rotation in the envelopes of giants, in the sense that rapidly rotating stars would develop much shallower angular velocity profiles in their envelopes than do slowly rotating stars.