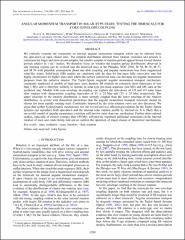 We critically examine the constraints on internal angular momentum transport which can be inferred from the spin-down of open cluster stars. The rotation distribution inferred from rotation velocities and periods is consistent for larger and more recent samples, but smaller samples of rotation periods appear biased toward shorter periods relative to vsin i studies. We therefore focus on whether the rotation period distributions observed in star forming regions can be evolved into the observed ones in the Pleiades, NGC 2516, M 34, M 35, M 37, and M 50 with plausible assumptions about star-disk coupling and angular momentum loss from magnetized solar-like winds. Solid-body (SB) models are consistent with the data for low-mass fully convective stars but highly inconsistent for higher mass stars where the surface convection zone can decouple for angular momentum purposes from the radiative interior. The Tayler-Spruit magnetic angular momentum transport mechanism, commonly employed in models of high-mass stars, predicts SB rotation on extremely short timescales of less than 1 Myr and is therefore unlikely to operate in solar-type pre-main-sequence (pre-MS) and MS stars at the predicted rate. Models with core-envelope decoupling can explain the spin-down of 1.0 and 0.8 solar mass slow rotators with characteristic coupling timescales of 55 ± 25 Myr and 175 ± 25 Myr, respectively. The upper envelope of the rotation distribution is more strongly coupled than the lower envelope of the rotation distribution, in accord with theoretical predictions that the angular momentum transport timescale should be shorter for more rapidly rotating stars. Constraints imposed by the solar rotation curve are also discussed. We argue that neither hydrodynamic mechanisms nor our revised and less efficient prescription for the Tayler-Spruit dynamo can reproduce both spin-down and the internal solar rotation profile by themselves. It is likely that a successful model of angular momentum evolution will involve more than one mechanism. Further observational studies, especially of clusters younger than 100 Myr, will provide important additional constraints on the internal rotation of stars and could firmly rule out or confirm the operation of major classes of theoretical mechanisms.