Battle for the Buckeye State: Analysis of the 2010 Ohio Gubernatorial Race 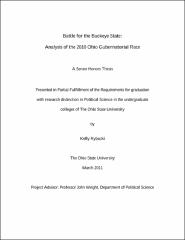 What factors led to victory for the Republican candidate in the 2010 governor’s race in Ohio? My research demonstrates that Democratic candidates are generally favored in Ohio counties with high unemployment. Ohio’s unemployment nearly doubled in size from 2006 to 2010. Why was Democratic incumbent Governor Ted Strickland unable to capitalize on this historical advantage? I argue that Strickland’s loss can be attributed to his inability to shift the “blame” onto the national level, due a Democratic president and Strickland’s visible ties to the Obama Administration. John Kasich was electorally successful because he was able to control the economic debate, verified through campaign and media output.