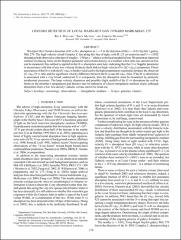 We report the Chandra detection of O VII Kα absorption at z = 0 in the direction of the z = 0.03 Seyfert 1 galaxy Mrk 279. The high-velocity cloud Complex C lies along this line of sight, with H I 21 cm emission and O VI λ1032 absorption both observed at velocities of roughly-150 km s^-1 relative to the local standard of rest. We present an improved method for placing limits on the Doppler parameter and column density of a medium when only one unresolved line can be measured; this method is applied to the O VII absorption seen here, indicating that the O VII Doppler parameter is inconsistent with that of any low-velocity (Galactic thick disk) or high-velocity O VI [(O VI)_HV] component. Direct association of the O VII with the (O VI)_HV is further ruled out by the high temperatures required to produce the observed (O VI)_HV/O VII ratio and the significant velocity difference between the O VII and (O VI)_HV lines. If the O VII absorption is associated with a very broad, undetected O VI component, then the absorption must be broadened by primarily nonthermal processes. The large velocity dispersion and possible slight redshift of the O VII absorption (as well as limits on the absorber's temperature and density) may be indicative of a local intergalactic medium origin, although absorption from a hot, low-density Galactic corona cannot be ruled out.