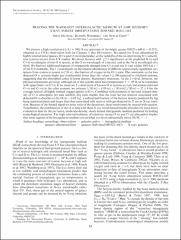 We present a high-resolution (λ/Δλ approx 500) X-ray spectrum of the bright quasar H1821+643 (z = 0.297), obtained in a 470 ks observation with the Chandra X-Ray Observatory. We search for X-ray absorption by highly ionized metal species, O VII and O VIII in particular, at the redshifts of the six intervening O VI absorption systems known from UV studies. We detect features with ~> 2 σ significance at the predicted O VII and O VIII wavelengths of one O VI system, at the O VII wavelength of a second, and at the Ne IX wavelength of a third. We find two additional features of comparable strength (one O VII and one O VIII) within 1000 km s^-1 of the O VI redshifts. The 1 σ constraints on the relative abundances of different species imply significant variations from system to system in f(O VI), the fraction of oxygen in the O VI state. The constraints in the two detected O VI systems imply gas overdensities lower than the values δ ~> 100 expected in virialized systems, suggesting that the absorption arises in lower density, filamentary structures. At the 2 σ level, however, the physical constraints are weak, although all of the systems must have temperature T < 106 K to be consistent with upper limits on O VII. If we treat our 2 σ detections of known O VI systems as real, but assume minimal O VII and O VIII in the other systems, we estimate [f(O VI) + f(O VII) + f(O VIII)]/f(O VI) = 32 ± 9 for the average ratio of all highly ionized oxygen species to O VI. Combined with estimates of the total column density of O VI absorption per unit redshift, this ratio implies that the total baryon fraction associated with detected O VI absorbers is Ω_b(O VI) ~ 0.03 h^-1 _70, a substantial fraction of the baryon density predicted by big bang nucleosynthesis and larger than that associated with stars or with gas detected in 21 cm or X-ray emission. Because of the limited signal-to-noise ratio of the detections, these results must be treated with caution. Nonetheless, the combination of the O VI data with these X-ray forest measurements provides the most direct evidence to date for the pervasive, moderate-density, shock-heated intergalactic medium predicted by leading cosmological scenarios. The high inferred incidence of relatively strong O VII and O VIII absorption implies that some regions of the intergalactic medium are enriched to a level substantially above [O/H] = -1.