The Topology of Large-Scale Structure in the 1.2 Jy IRAS Redshift Survey 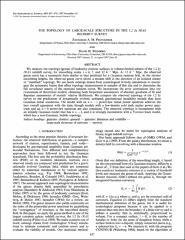 We measure the topology (genus) of isodensity contour surfaces in volume-limited subsets of the 1.2 Jy IRAS redshift survey, for smoothing scales λ = 4, 7, and 12 h^-1 Mpc. At 12 h^-1 Mpc, the observed genus curve has a symmetric form similar to that predicted for a Gaussian random field. At the shorter smoothing lengths, the observed genus curve shows a modest shift in the direction of an isolated cluster or "meatball" topology. We use mock catalogs drawn from cosmological N-body simulations to investigate the systematic biases that affect topology measurements in samples of this size and to determine the full covariance matrix of the expected random errors. We incorporate the error correlations into our evaluations of theoretical models, obtaining both frequentist assessments of absolute goodness of fit and Bayesian assessments of models' relative likelihoods. We compare the observed topology of the 1.2 Jy survey to the predictions of dynamically evolved, unbiased, gravitational instability models that have Gaussian initial conditions. The model with an n = -1 power-law initial power spectrum achieves the best overall agreement with the data, though models with a low-density cold dark matter power spectrum and an n = 0 power-law spectrum are also consistent. The observed topology is inconsistent with an initially Gaussian model that has n = -2, and it is strongly inconsistent with a Voronoi foam model, which has a non-Gaussian, bubble topology.